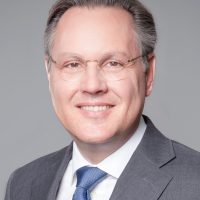 Theodore has 25 years’ experience in both asset management and as an asset owner in Europe and the United States. He serves as an advisor to pension funds worldwide.

He has served as Chief Investment Officer at Lombard Odier Investment managers, where he oversaw the management of 6bn CHF in pension fund assets and chaired the investment committee of the firm’s Swiss pension fund. He currently serves as an advisor to the BAE Pension Schemes (UK) and is a member of the Investment Advisory Committee of the Virginia Retirement System (USA), one of the world’s 50 largest pension funds.

Prior to Lombard Odier, he served as CEO and CIO of the CERN Pension Fund, where he initiated a risk-based approach that became known as the CERN model. Previously he managed capital markets activities and investments for ITT Corporation, a New-York conglomerate, where his initial responsibilities were in mergers & acquisitions. He started his career at Accenture. Under his leadership both the Lombard Odier and CERN Pension Funds received distinctions for their asset management. He has received HFR’s award for “Outstanding contribution to the alternative investment industry by an institutional investor”. He is past secretary of the EU’s RESAVER task force for a pan-European pension plan. He holds an MBA from Northwestern, an MSc from the Swiss Federal Institute of Technology, and is a CFA Charterholder.