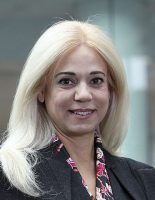 Elena Ambrosiadou has been at the forefront of hedge fund developments in Europe for two decades and is the CEO of the globally regulated IKOS Structure. Elena is an NFA Principal. Elena is responsible for strategic development, and is a member of the Investment and Risk Management Committees. For the fourth time Elena Ambrosiadou has been selected in the FN100’s most influential European Women in Finance.

She is an Advisory Board member of Cranfield School of Management, and a Dean’s Council Member of the Harvard Kennedy School. In June 2007, she received the Cranfield Distinguished Alumnus Award. She is ranked in the Top 50 Leading Women in Hedge Funds, by The Hedge Fund Journal/Ernst & Young, in 2010 & 2011. Ms Ambrosiadou is a Patron of ARK, a Trustee of the Oxford Philomusica, and a supporter of the Hellenic Rescue team; Ms Ambrosiadou was awarded the Red Cross Humanitarian Award in June 2008.

Ms Ambrosiadou obtained a degree in Chemical Engineering from Leeds University, an MSc in Technology and Development from Imperial College London, and an MBA from Cranfield. As a chemical engineer she worked internationally with British Petroleum, before joining KPMG where she worked as a management consultant in Bahrain.